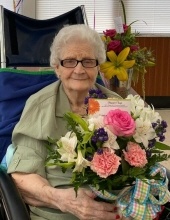 Lena ELIZABETH Herbison went to be with the Lord on Saturday, November 6, 2021. She was born in Shaw, MS. to James Albert Pentecost and Lena Louise Bole Pentecost on August 23, 1920. The family soon moved to the Longshot community. She attended school at Longshot until the school was incorporated with the Benoit school system when she was a junior.

Her son’s earliest memories of her included her teaching Sunday school at the Longshot Methodist Church and the parties she sponsored for her students.

She was an accomplished gardener and a great cook. Each year she would “can” produce from her garden to provide for the family through the winter months. She was a very active member in the “Home Demonstration Club” and a very active participant in the “secret pal” program.

Elizabeth was an avid writer and corresponded with her pen pals and relatives frequently. These activities began when she was in high school and continued until her death. Her handwriting was very attractive.

After her sons graduated Benoit High School, she and her husband move to Bayou Street in Shaw, MS. She transferred her church membership to the Shaw Methodist Church and was active there until health prevented her from attending.

On several occasions she mentioned the influence her mother “Miss Lena”, who was a mid-wife and county nurse, had on her life. She referred to her mother as a Christian in ‘word and deed”. Her family and friends will acknowledge that Elizabeth followed her mother’s example, loved the Lord, and lived a life that inspired others.