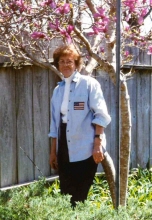 Mrs. Loretta Nell Brown Morgan, 83, of Cleveland, MS passed away peacefully on December 30, 2016. Visitation will be 1:00 p.m. to 2:00 p.m. Thursday, January 5, 2017, at Ray Funeral Home. A Celebration of Life Service will immediately follow beginning at 2:00 p.m. Thursday, January 5, 2017, at Ray Funeral Home with Rev. Larry Braswell officiating. Interment will be at New Cleveland Cemetery. She was born in Cleveland, MS, to Scott and Jessie Gilmer Brown on August 23, 1933. Growing up she attended Litton and Skene schools. It was at a basketball game that she met her future husband Ralph "Sonny" Lee Morgan. They began dating and after getting cold feet at least twice, she finally agreed to marry him on his third proposal. They exchanged vows at a preacher's house in Shelby, MS on November 5, 1949. She was just 16 and Ralph was 21. They remained husband and wife for 60 years and raised three children, Patty McMurry of Boyle, MS; Scott Morgan of Searcy, AR and Vicki Brooke of Cleveland, MS. She only worked a few years outside the home but most of her years were filled with the duties of wife and mother which she loved. She enjoyed spending time working in her yard although she asked herself several times over the past few years "what was I thinking when I planted all of this stuff". She especially loved the precious time and special moments that she got to spend with her grandchildren. She is preceded in death by her parents, Scott and Jessie Brown; brothers, Earnest Brown and Jack Brown; sons-in-law, Donald McMurry and Robbie Whitt; and step-grandson, Chris Roberson. She is survived by her children, Patty McMurry of Boyle, MS, Vicki Brooke of Cleveland, MS, and Scottie Morgan (Vickie) of Searcy, AR; sister, Betty Teuklve (Jack) of Lebanon, OH; grandchildren, Ryan McMurry of Boyle, MS, Ty McMurry of Memphis, TN, Lindsay Brooke of Cleveland, MS, and Austin Brooke of Cleveland, MS; great-grandson, Morgan Scott McMurry of Boyle, MS; great - step grandsons, Chandler Roberson, Tylor Roberson and Chaz Roberson all of Searcy, AR; and a host of brother/sister-in-laws and nieces and nephews.

To order memorial trees or send flowers to the family in memory of Loretta Nell Morgan, please visit our flower store.