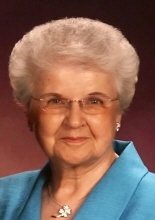 Lyla Jean Jaudon Taylor
Lyla Jean Jaudon Taylor, 87, passed away peacefully on Thursday, August 8, 2019, at Indywood Estates in Cleveland.  She was born on January 21, 1932 to Theron Curtis Jaudon and Sybil Leona Long Jaudon of the Hamilton community near Aberdeen.  She attended Aberdeen High School and married Troyce Travis Taylor Christmas Day 1949.  Their journey together included living in Shreveport, Louisiana, Hamilton, Cimarron, New Mexico and Tupelo.  They settled in Cleveland in 1972 where they were both employed by Delta State University. She first worked as the Post Mistress of the DSU Post Office and then as the assistant manager of the university bookstore.  Before her retirement from DSU in 1996 after twenty-two years of employment, she was honored with the H. L. Nowell Award given for dedication and concern for others.
She was a long-time member of St. Luke United Methodist Church where she enjoyed working in the kitchen helping to prepare and serve meals for church occasions and serving meals at the DSU Wesley Foundation.  She also was a Lioness, the women's support group of the Cleveland Lion's Club.  She was a member of the Cleveland Garden Club and an active participant in water aerobics at DSU for many years.
She was preceded in death by her parents, and leaves to cherish her memory Troyce, her husband of sixty-nine years; her daughter DK Baria and her husband Lance of Inverness; granddaughter Laura Henson and her husband Chase of Tupelo; sister Judy Virginia Jaudon Raburn and her husband Joe of Broomfield, Colorado; Georgia Sanders and her husband J. C. of Raymond; and three great grandsons William Taylor Henson, Wesley Lance Henson, and Reed Chase Henson, along with several nieces and nephews.
The family will receive guests Saturday, August 10, from 1:00 pm until the 2:00 pm memorial service at St. Luke United Methodist Church in Cleveland.
The family would like to thank Director Paige Givens and the staff at Indywood Estates, Dr. Steven Clark, and hospice nurse Marjorie Sappington and caregiver Jean Davenport for their care and support.
Memorials may be made to St. Luke United Church, 1227 Deering Street, Cleveland, MS 38732 or a charity of choice.

To order memorial trees or send flowers to the family in memory of Lyla Jean Jaudon Taylor, please visit our flower store.