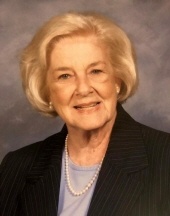 Martha (Marcy) Hiter, age 86, died surrounded by loving family and friends at Indywood on January 28th. Martha was born in Pine Bluff, Arkansas on May 16, 1933 to Opal Elizabeth and Thomas Jefferson Collins. Martha attended Rolling Fork Schools where she played on the varsity basketball team and was selected head cheerleader for the football team. While attending high school, she was voted Most Beautiful and Homecoming Queen.
Martha married William C. Partee from Cary, MS. on December 1951. Martha and their family moved to Cleveland in 1960. A lifelong learner, Martha pursued her college education at Delta State University with an undergraduate degree in Elementary Education. Not satisfied with just an undergraduate degree, Martha continued her education and was one of the first students at DSU to receive a graduate degree in Library Science in 1968. Martha taught school at Pearman Elementary before becoming the children's district librarian at Bolivar County Public Library. She was a long time member of the First United Methodist Church in Cleveland where she served in many different capacities. Martha married Henry P. Hiter in 1974 and shared a love for hunting and the outdoors in Africa and South America as well as many states in the US.
Martha was an avid reader, hunter and bridge player. She was most at home reading a good book, starting a new project, and spending time with family and friends. She loved all animals; especially Jack Russell terriers.
She is preceded in death by daughter Jann Partee, son Len Hiter, husband William C. Partee and husband Henry P. Hiter. Also brother Mike Collins, sister-in-law Florine Collins, and parents Opal and Thomas Collins.
Survived by daughters Liz Sutton (John), Lucy Tierce (Will) and sons Chris Partee and Park Hiter (Linda). She is also survived by sister Janice Wyatt (Kent), brother Ike Collins and sister-in-law Polly Collins and granddaughters Kate Sutton, Hayden Claire Guest (Will), and grandson Miles Wingett. She leaves behind many nieces, nephews and friends who loved her keen sense of interest in their lives. Mom, Marcy, Martha is remembered for her strength, fierce independence, tenacity and adventuresome spirit but most of all for her love for family and friends.
The family appreciates the loving care provided by Debra Adams, Susan McMillan, Val McKnight, and Patricia Smith. Also the incredible support from Paige Burns and the Indywood staff and Hospice of North Sunflower.

To order memorial trees or send flowers to the family in memory of Marcy Hiter, please visit our flower store.