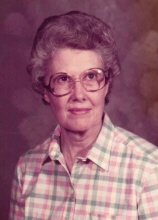 Mary Anne Horton Berger was born in Noxapater, Mississippi on February 6, 1926 to Grover Cleveland and Anna Wilson Horton. Together with her older brother, Jim and her younger sister, Amelia, Mary Anne grew up in Cleveland, Mississippi. She was graduated from Cleveland High School, and studied two years at Delta State Teachers College before receiving her B.S. in Home Economics from Mississippi State College for Women at Columbus, Mississippi.
On June 19, 1948, Mary Anne married Rutherford Collins Berger of Cleveland, MS and they had three children: Mary Wilson Berger Carrick, Rutherford Collins Berger, Jr (Charlie), and William Horton Berger. They raised their family in a house that they built on Memorial Drive. Throughout her life, Mary Anne was an active volunteer in the community. She was a cub scout leader for four years, Band Club president for two years, Band Club Chaperone, Red Cross Hospital bookmobile volunteer, receptionist for the crippled children's clinic, Charter member of the Junior Women's Club, youth worker at the First Presbyterian Church, Cleveland, and a home room mother as long as her children were in school. In addition to volunteering, Mary Anne worked as a secretary for the Nehi Bottling Company, and as a teaching assistant in the elementary schools. Mary Anne loved to cook and enjoyed preparing foods that were her family's favorites: fudge cake, asparagus casserole, spaghetti, cranberry salad, or whatever food a child or grandchild might especially enjoy. An avid reader, she enjoyed all kinds of books from mystery novels to cookbooks to biographies, and even progressed to reading from a Kindle in recent years. She sewed pants and dresses for her grandchildren using creative fabric, and was tireless in researching appliances or automobiles in order to find the best product.
A member of the First Presbyterian Church, Cleveland since the age of 9, Mary Anne was a faithful attender of Sunday school and worship, until no longer physically able to do so. Mary Anne did not draw attention to herself but many church covered dish dinners and receptions were strengthened by her behind-the-scenes hard work.
A true Southern lady, Mary Anne was gracious throughout her life, and appreciative of every kindness. She was especially grateful for the care shown to her by Bettye Phillips, as well as Mary Carter, Doris Jones and Marjorie Sappington. Gratitude was at the foundation of her personality and she was grateful for her family, grateful for the life that she has led, and grateful for the life to come.
In addition to her parents, Mary Anne Horton Berger was predeceased by her husband of 72 years, Rutherford Collins Berger, her brother, Dr. James W. Horton, and her sister, Amelia Barr Horton Rushing. She is survived by her daughter, Mary Wilson Berger Carrick, her sons, Rutherford Collins Berger Jr. (Becky) and William Horton Berger (Sally Hughes); her grandchildren, Jason Lawrence Carrick, Stephen Aaron Carrick, Ike Collins Berger (Karen), Anna Rebecca Berger Copeland (Ryan), Sara Anne Berger, Mary Judith Berger, and Paul Rutherford Berger; her great-grandchildren, Emily Copeland, Edwin Copeland, Brayden John Carrick, Teagan Harli Carrick, Richard Berger, Julia Berger, Kenzie Carrick. She is also survived by nieces and nephews, Sam Rushing (Diane), Jim Rushing (Billie Marie), Jo Miller (who showed much kindness during Mary Anne's illness), Tom Rushing, Walker Horton, Wilson Alexander (Lisa), William Alexander, and Deborah Berger. A graveside service will be held Thursday, June 3, 2021 at 11:00 AM at the New Cleveland Cemetery. The family requests that memorials be made to Helping Hands in Cleveland, MS.

To order memorial trees or send flowers to the family in memory of Mary Anne Berger, please visit our flower store.
Send a Sympathy Card