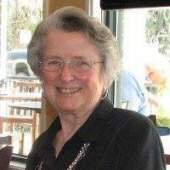 Mary was born on March 9, 1932, to Ambrose Cleveland Scarboro and Lollie Belle Twitty Scarboro in Augusta, Georgia. She was active in numerous sports and organizations in high school and continued to stay active throughout her lifetime. She attended Shorter College in Rome, GA, for two years before transferring to the University of Florida in Gainesville, FL. While at the University of Florida, she was a member and officer of numerous campus organizations including Alpha Chi Omega where she met lifelong friend Tena Davies. After graduating from the University of Florida in 1952 with a degree in Commercial Art, she began working as a graphic artist producing commercials and other duties that needed production. She also had her own small television show where she would share her love for art with her audience. Later she continued her education toward her Master's Fine Arts at the University of Tennessee-Knoxville.

Mary spent her later years as an artist working on many different pieces using a variety of techniques and mediums. She was extremely talented as a painter and photographer but her true loves were drawing, watercolor and ceramics. Mary was a lifelong learner; she continued to take drawing and painting classes at every opportunity and never stopped drawing. Her sketchbook was with her when she died. She was a member of the Dublin Service League, she was one of the founders of the Dublin (GA) Association of Fine Arts as well as one of the founders for the Dublin (GA) St. Patrick's Day Festival which has grown to a highly anticipated four-day annual event. Mary was a generous and loving mother, grandmother, and a cherished friend to many.

She was preceded in death by her parents, Ambrose and Lollie Belle Scarboro; and brothers, James Asbury Scarboro and Donald Scarboro.

It was her wish to be riding the tides of the Chechessee River, so no services will be announced at this time. In lieu of flowers, donations may be sent to the Delta State University Art Scholarship Fund (Delta State University Foundation / Box 3141 DSU / Cleveland, MS 38732), or a charity of your choice.

To order memorial trees or send flowers to the family in memory of Mary Faith Salley, please visit our flower store.