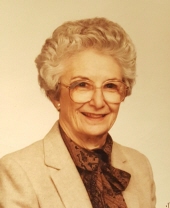 Mary Elizabeth House Crutchfield, 97, died Monday, May 23, 2016, at the Washington Care Center in Greenville, Mississippi. Funeral services will be Tuesday, May 31, 2016, with visitation at 10:00 A.M. and services at 11:00 A.M. at Ray Funeral Home. Burial will follow at the New Cleveland Cemetery under the direction of Ray Funeral Home.
Mary Elizabeth was born December 5, 1918, in Shaw, Mississippi to Charles P. House and Patricia Fry House. Her family moved to Cleveland in 1932 where her father and Mr. W.G. Petty of Memphis established Petty-House Gas Co. She graduated with honors from Cleveland High School and then attended Delta State Teachers College again graduating with honors in the Class of 1939.
After moving away to take part in her Greatest Generation efforts in World War II, she returned to Cleveland to teach English in the local schools and raise her three daughters. She taught many years at Margaret Green Junior High School. Following completion of a Masters Degree in English at the University of Mississippi, she returned to her beloved alma mater, now Delta State University, where she provided many young minds with the language tools they would need for success in their chosen occupations.
Mary Elizabeth was a member of the congregation of the First Presbyterian Church for over 80 years. She was a dedicated Christian and educator and was active in her church and community until her later years, when a catastrophic eye condition caused progressive loss of her vision. Mary Elizabeth nonetheless continued to be the center of the family for her three daughters and treasured her place in the lives of her extended family. She will forever be remembered by them for her incredible courage, abiding love, and strong faith.
She is preceded in death by her parents, Charles Pearce House and Patricia Fry House and her brother Charles Pearce House, Jr. Survivors include her daughters, Patricia Linko (Richard) of Raleigh, North Carolina, Marion Law (Sidney) of Chatham, Mississippi, and Marcia Pressler (James) of Hoover, Alabama; three grandchildren, Melissa Law Kovarcik (Joey), Robert Pressler, and Elizabeth Pressler; great grandson, Pearce Kovarcik; her brother, Felix Fry House of Rancho Mirage, California; her sister-in-law, Jean Knott House of Cleveland and two nieces, Charlene H. Doel (Jeff) of Lakeville, Massachusetts and Mary Jean H. Gates (Dennis) of Cleveland.
The family wishes to thank the staff at the Washington Care Center for their professional and compassionate care of Mary Elizabeth. In lieu of flowers, memorials may be made to Friends of Handicapped Readers, 3881 Eastwood Drive, Jackson, MS 39211 or to a charity of your choice.

To order memorial trees or send flowers to the family in memory of Mary House Crutchfield, please visit our flower store.
Send a Sympathy Card