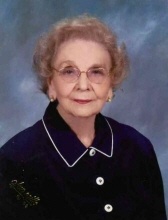 Mrs. Mildred Stevens Braswell, 96, of Cleveland, passed away on Tuesday, July 12, 2016, at Bolivar Medical Center. Visitation will be 1:00 to 2:00 Thursday, July 14, 2016, at Ray Funeral Home. Celebration of Life services will immediately follow beginning at 2:00 p.m. Thursday, July 14, 2016, at Ray Funeral Home with Rev. Milton Burd officiating.
She was born on February 20, 1920, to Earnest Alvin Stevens and Emma Ruth Traham Stevens in the Hollandale Community. She married Maurice Braswell on September 2, 1939, in Crossett AR. Mrs. Braswell graduated from Arcola High School. She was employed at Tenenbaums of Greenville for many years before retiring. She had a great interest in gardening and was a member of Magnolia Garden Club where her arrangements often won best in show. She enjoyed traveling and doing for others. During WWII, everyday she would write a letter to her three brothers who were serving overseas. She was a member of First Baptist Church in Greenville before moving to Cleveland and joining the First Baptist Church. Mrs. Braswell is preceded in death by her parents, Earnest Alvin Stevens and Emma Ruth Traham Stevens; husband, Maurice Braswell; and siblings, Hugh Stevens, William Stevens, and Dennis Stevens. She is survived by her brothers, Franklin "Pap" Stevens (Rosemary) of Boyle and Robert E. Stevens of Flowood, formerly of Hollandale; sister, Louise Stevens Lindsey (the late, Authur) of Oxford; sister-in-law, Claudine Stevens of Oxford; four nephews, Hugh Ward Stevens, Charles Richard Stevens, Ryan Stevens, and Michael Dennis Stevens (Vicki); three nieces, Ann Gail Stevens, Rebecca Lynn Graham, and Dr. Rhonda Lee Lindsey; four grand-nieces, Claire Stevens, Emily Elisa Stevens, Lauren Stevens, and Holly Graham; one grand-nephew, Heath Dennis Stevens; and a host of other beloved extended family members. The family would like to thank the staff at Providence Assisted Living, the staff at Bolivar Medical Center Long Term Care; the staff in Bolivar Medical Center Intensive Care Unit; Dr. Clark; and caregiver, Stephanie Jackson for all of their kindness, care and compassion that has been shown to Mrs. Braswell and her family. In memory of Mrs. Braswell, the family asks that donations be made to First Baptist Church in Cleveland and/or to the charity of your choice.

To order memorial trees or send flowers to the family in memory of Mildred Stevens Braswell, please visit our flower store.