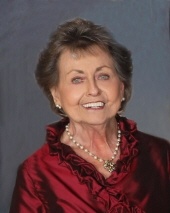 Nan Neblett McGarrh died at her home In Merigold, Mississippi, on August 25, 2019, surrounded by her family.  Born in Greenwood, Mississippi, on November 8, 1938, she was predeceased by her parents George Rives Neblett, senior and Dr. and Mrs. William Wallace McKenzie.  She was also predeceased by her husband Henry Turner (Peter Rabbit) McGarrh and their cherished daughter, Dr. Kellie Wilkinson McGarrh.
A graduate of Gulf Park High School, Nan attended Ole Miss, where she was a member of Phi Mu sorority.  She graduated from Mississippi University for Women.  She was a communicant of Calvary Episcopal Church in Cleveland, Mississippi.  She served on multiple Vestries and Search Committees for her church and was also Senior Warden.  She also worked as the church secretary for many years.  Active in many aspects of the community, Nan was president of the Junior Auxiliary and Queen of its Charity Ball.
Nan's life was marked by her courage and grace and her indomitable spirit. She lived for decades with severe rheumatoid arthritis, but she lived without complaint and with the sparkle still in her eyes and in her wit.  An inspiration to all who knew her, she served as an example of faith and joy in every circumstance.  The outpouring of love from friends and family is a testament to a life beautifully lived.
Nan is survived by her beloved and devoted son, McKenzie Turner McGarrh; his wife Stephanie, whom she loved as a daughter; and her two grandchildren Bailey and McKenzie, who were the lights of her life.  She is also survived by her brother Rives Neblett of Shelby, her sister Mary Thompson of Clarksdale, and her sister-in-law Willena Highsmith of Memphis.
Visitation will be at Ray Funeral Home in Cleveland, Mississippi, on Tuesday, August 27, 2019, from five until seven.  The funeral service will be at Calvary Episcopal Church in Cleveland on Wednesday at two p.m. with burial to follow in the Merigold Cemetery.  Memorials may be made to The Kellie McGarrh Scholarship Fund at the University of Tennessee College of Education, Health, and Human Science at 1122 Volunteer Road, Knoxville, TN 37996-3452 or to a charity of the donor's choice.

To order memorial trees or send flowers to the family in memory of Nan Neblett McGarrh, please visit our flower store.