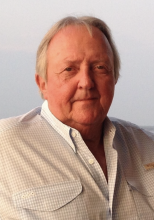 Pat Walton Denton, 73, passed away Tuesday, February 23, 2021, at Baptist Memorial Hospital East in Memphis, TN. Pat was born February 10, 1948. His Parents were Lola Walton Denton and John Mason Denton of Shelby, MS. A graveside service will be held at the Shelby Cemetery at 2pm on Friday, February 26th. Those wishing to attend are asked to wear masks and social distance. Pat attended Marion Military Institute and Shelby High School. While attending Delta State University he was drafted and served in the US Army. Before entering the Army, he worked for a towing company traveling on the Mississippi River; hence the nickname "Steamboat". He continued to patriotically serve his country in the Army Reserves. Pat subsequently joined his family business and proudly farmed until he retired in 2006.
He married the former Susan Felts Lindsey of Cleveland in 1982. He is survived by Susan, his eldest son Pat Walton Denton Jr., his wife Alice, their three sons Charles, James, and Edward, his youngest son Shelby Edward Denton, his brother Jack Denton Jr and his wife Trish of Clarksdale, MS, and his nephew Mason Denton. Pat never met a stranger and will be dearly missed by many. "Whoa, Steamboat! Done hit a snag!" Any memorials may be sent to a charity of choice.

To order memorial trees or send flowers to the family in memory of Pat Walton Denton, please visit our flower store.
Send a Sympathy Card