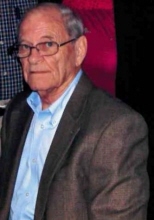 Mr. Reese Warren Manning, III, 82, of Drew, passed away Sunday, October 23, 2016, at his home. Visitation will be 1:00 to 2:00 p.m. Thursday, October 27, 2016, at Drew Baptist Church. Memorial services will immediately follow beginning at 2:00 p.m. with Rev. Glenn Seefeld and Rev. Robert Haney officiating. Mr. Manning was born in Drew, MS, on November 15, 1933, to Reese Warren Manning, Jr. and Anne McGraw Manning. He proudly served our Country in the United States Army. He was a graduate of Mississippi State University with a degree in Agriculture. While there, he won many awards such as the Distinguished Serve Award. He then attended courses at Louisiana State University in Banking and Finance. In 1957, he married Joan Hensley in Mantee and they were happily married for 59 years. He worked for over fifty years as a Banker and retired from Regions Bank in Drew. He was a talented pianist and organist who often played at Drew Baptist Church where he was a member.
He is preceded in death by his parents, Reese Warren Manning, Jr. and Anne McGraw Manning. Mr. Manning is survived by his wife Joan of Drew; daughter, Katharine Manning Loeb of Memphis, TN; son, Richard Warren Manning of Coffeeville; grandchildren, Ashton Manning of Newport New, VA; Jackson Manning Loeb currently of South Carolina; Brayden Bennett Reese Manning of Newport News, VA; Anne Hensley Loeb of Nashville, TN; and Robert Edwin Loeb Jr. of Breckinridge, CO; sisters, Margaret Manning Walker of Cleveland, MS and Peggy Manning Bond of Kingsport, TN; brother, John Michael Manning (Sandra) of Madison, MS; and six nieces and nephews. In Memory of Mr. Manning, the family requests donations be made to St. Judes, Drew Baptist Church, and Drew Methodist Church.

To order memorial trees or send flowers to the family in memory of Reese Warren Manning, III, please visit our flower store.