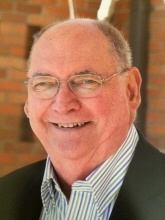 Richard D. Strahan, Ph.D, age 80 of Cleveland, MS, entered eternal rest on Wednesday, June 9, 2021 at his home. He was Professor Emeritus at Delta State University. He was known to his friends as Dick, Dr. Strahan, or just Doc.
Dick was preceded in death by his parents, Ray and Irma Strahan, his sister Linda Brennan, and niece Robin Brown. He is survived by his niece Kelly Brennan Jones, her husband Jim and their two sons Devin and Derek. Although Dick never had children of his own, he considered them to be his nuclear family. He also proudly embraced Brian Carriere, his wife Meredith, and their children Regan, Carolina, Carter, and Dutch as his adopted family. Dick was proud of each of them and would gladly tell stories about his children and grandchildren to anyone who would listen.
Dick was born on October 3, 1940 in Mississippi but grew up in Mobile, Alabama. He was a bright child; always reading, so no one was surprised when he chose to attend college at the University of Southern Mississippi. Dick went on to earn masters and doctoral degrees from his beloved University of Florida - GO GATORS. He was proud to have attended the college when Steve Spurrier earned the first of Florida's three Heisman trophies.
After earning his doctorate, Dick began his teaching career at Delta State University, where he taught speech and theatre for 34 years. Dick put on countless theatre productions with his university students and delighted in watching them grow in their craft.
Dick was known throughout the community for his love and support of art and artists, especially former students from DSU. He encouraged them in their profession and often personally supported them with his patronage. Dick's art collection rivals that of many people throughout the Delta. He was approached on numerous occasions to loan pieces to exhibits at the Ohr O'Keefe museum in Biloxi, MS and a posthumous exhibit of Carole Pigott's work in Atlanta, GA. Always one who contributed to his community, Dick served on the board and as treasurer of Habitat for Humanity for many years. He served as project supervisor for numerous homes in the Cleveland area. Dick also found a way to combine his passion for art with his service to the community. In addition to contributing to the Delta Arts Alliance, Dick was extremely proud of his service to the Crosstie Arts Festival. His many years of service to the organization led to the creation of the position of Exhibitor Coordinator Emeritus so that Dick could continue to serve long into his retirement.
Dick was a proud member of Calvary Episcopal Church in Cleveland. While there he served on the parish vestry. He also served on several priest search committees and headed up a committee for the church renovation and addition of the columbarium where his remains will be placed for eternity.
While not native to Cleveland, Dick made this place his home. He had numerous opportunities to move and teach at other universities but he chose to remain here because of the unique qualities of Delta State University. He was an avid supporter of the arts. He was a beloved professor, theatre director, mentor, and friend to many students that traversed the halls of DSU. Dick will be missed by many in the community but mostly by his daughter, son, and numerous grandchildren that he cherished so deeply.

To order memorial trees or send flowers to the family in memory of Richard Strahan, please visit our flower store.