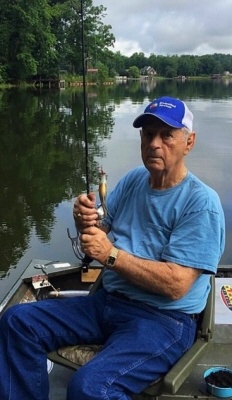 Robert “Bob” Walters Sr., 85, of Shaw, MS went to be with the Lord Tuesday, December 7, 2021. Visitation will be 10:00 a.m. to 11:00 p.m. Saturday, December 11, 2021, with A Celebration of Life Service to follow at 11:00 p.m. at Ray Funeral Home in Cleveland, MS. Interment will be Shaw cemetery. Bob was born January 28, 1936, in Lewistown, PA to George Walters & Mabel Bedlyon. On June 6, 1957, he married the love of his life Mary Louise Sellers in Shaw, MS. They raised 2 children Anita (Bobby) Antici and Eugene (Diana) Walters. Bob served in the United States Army. He would work 2-3 jobs at a time to ensure he provided for his family. Bob enjoyed working with his hands and had a knack with working on car and truck engines. He could build anything with wood. After his retirement from Baxter’s, he had time to enjoy watching westerns, fishing, and playing dominoes with his friends. Bob was always wanting to make people laugh through his stories and jokes. Bob would always speak his mind and you knew exactly where you stood on any given situation. He was a member of Interstate Baptist Church where he also served as a deacon. He loved his family and friends and prayed for them daily. He is predeceased by his parents, George Walters & Mabel Bedlyon, and siblings. Bob is survived by his wife, Mary Louise Sellers; son, Eugene Walters Jr. (Diana); daughter, Anita Antici (Bobby); granddaughters, Holly Walters, Breelyn Baade, Bethany Toole, Baylee Brooks, and Mary Lauren Antici; grandson, Dustin Antici (Stacy); great grandchildren, EllaCen Brooks, Addy & Alston Antici, Charlie Morrell, Emma Marbury, and Zoe Welch. In lieu of flowers please send donation to Interstate Baptist Church in Shaw, MS, or St. Jude Children Hospital.
To order memorial trees or send flowers to the family in memory of Robert Walters, please visit our flower store.