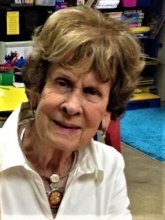 Rose Marie "Took" Litton Mason Cleveland, MS
Rose Marie "Took" Litton Mason 84, of Cleveland, MS was called home to be with the Lord on March 20, 2021. A visitation honoring her life will be held Monday, March 22, 2021 from 1:00-2:45PM at Ray Funeral Home with a Graveside Service Following at 3:00 PM in the North Cleveland Cemetery. Mask are required to attend visitation. Rose Marie was born on February 21, 1937 in Trenton, TN to John Hobert and Frances Gilmer Litton. She was welcomed by an older brother, Douglas Litton. Gaylene was the final addition to the family. They lived and made a home in Shaw, MS. Their church home was Shaw Methodist Church. Rose got the nickname of "Took" from her brother. She has been known as "Took" to all ever since. She was athletic and played tough in girls basketball and was a cheerleader. After graduation, Took went on to Delta State Teacher's college. That is where she met Robert G. "Brick" Mason. They married on 03/07/1957, they both graduated from Delta state with a Bachelor's and Master's in Education. They both began teaching careers. They settled in Cleveland, and they were original charter members of St. Luke United Methodist Church. Brick and Took had three children Beth, Bob, and Brook. After her 30 years in teaching and making tons of friends, Took retired a few years behind Brick. That did not stop her though! She found a new passion and many new friends working at Neysa's Fireside Shop. They quickly became like family to her. She loved helping people find the perfect gift. Watching their own kids grow up, get married and having children of their own was something she and Brick were so proud of. They were both so active in the grandchildren's lives. They had three grandchildren all with their own funny little stories that Took and Brick would brag about. Great grandchildren then came along and gave Took such joy. Took is preceded in passing by her husband(Brick), her son(Bob), parents(Hobert and Frances Litton), and her brother, Douglas Litton and sister in law Jean Litton. She leaves behind two daughters; Beth Redditt (Bill) of Cleveland, and Brook Williams (Ed) of Brandon, three grandchildren; Ann Marie Myers (Jeffrey) and Ryan Redditt of Cleveland; and Mikie Williams of Brandon, four great grandchildren; Mattison Rose Myers and Caleb Myers of Cleveland, and Eli Williams and Greyson Williams of Brandon, her sister Gaylene Davis (Billy) of Cleveland, Brother - in law, Ken Mason as well as nieces and nephews she cherishes. Took had so many wonderful friends that she loved greatly.

To order memorial trees or send flowers to the family in memory of Rose Mason, please visit our flower store.
Send a Sympathy Card