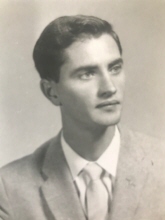 Heaven gained an angel on Saturday, February 16, 2019 as Travis Earl Cooper, Sr. passed away at North Sunflower Medical Center in Ruleville, Mississippi surrounded by his children. A Memorial Celebration of Life Service will be 10:00 a.m. Wednesday, February 20, 2019, at Linn Methodist Church in Linn, Mississippi. A Graveside will follow in Linn Methodist Church Cemetery next to his late wife, Betty Ann Bagwell Cooper, who passed away in 2012.
Travis was from the Steiner Community near Shaw. He was 85 years young. Travis was well-known for being light-hearted and witty. He was always the life of the party and enjoyed being around people. He loved getting his class together for their reunions and this past year enjoyed driving his classmates around at Homecoming in his old Ford Galaxie convertible with the top down. Linn School Class of 1951 was the talk of the town!
Travis was preceded in death by his wife of forty-eight years Betty Ann Bagwell Cooper; his father, Travis Leroy "TL" Cooper; his mother, Sammie Lois Buck Cooper; and his brother, Lieutenant Sammy Buck Cooper who went missing in action during the Korean conflict. What a glorious reunion that must have been!
Travis is survived by his son Travis Earl "Chip" Cooper, Jr, (Janet McCollum Cooper); his middle child, Bradley Alan Cooper (Angela McCoy Cooper);  his daughter, Carmen Cooper Oguz (Cetin Oguz); and grandsons, Travis Blaine Cooper, Samuel Wade Cooper, Britton Bradley Cooper, Cetin "Cooper" Oguz II, and Cruz Oguz. He is also survived by his sister, Mary Lois Cooper Turner; nieces, Patty Grom and Prissy Aguzzi; nephews, Eugene Bagwell and William Bagwell; and last, but not least, he leaves behind his sweet dog, "Little Buddy" who will continue to be cared for by his daughter-in-law, Janet.
Travis was truly a jack of all trades. He was originally a farmer and later became a social worker. He was a restaurant owner and manager and later became a nursing home and hospital administrator. He was actually the hospital administrator at the hospital where he passed. Later in life, he became the Sunflower County Election Commissionerâ€¦an elected position in which he served for over 30 years.
Travis was a Master Mason in the Drew Lodge and a significant highlight in his life was when both sons became Master Masons as well. He was so proud of Chip and Brad for this amazing accomplishment. He loved to fundraise for the Linn-Steiner-Roundaway (LSR) Volunteer Fire Department and was very effective in getting money donated to this cause for which both sons serve as volunteer fire fighters. He played the organ in church for decades, and he played music for many weddings and funerals over the years. He loved spending time with his five grandsons, and he spoiled them all. He enjoyed telling others of how proud he was of each one of them. These boys have a true legacy to follow in their Granddaddy.
He supported his late wife's love of antique car restoration and continued collecting cars even after her death. Carmen cared for her Daddy in the final months of his life as he lived with her family in Cleveland due to his declining condition. We are happy that he was able to spend his final time with family.
Travis's passing leaves an indelible hole in our hearts, but we rejoice in the knowledge that he is with our Savior. We would like to leave you with the following scripture:
"The righteous perish, and no one takes it to heart; the devout are taken away, and no one understands that the righteous are taken away to be spared from evil. Those who walk uprightly enter into peace; they find rest as they lie in death." ~Isaiah 57:1-2
In lieu of flowers, the family asks that donations be made to two charities which Travis held dear:
LSR Fire Department 800 Highway 442, Shaw, Mississippi 38773
Linn Methodist Church Cemetery Fund C/o 12 Carmelita Cove, Shaw, Mississippi 38773

To order memorial trees or send flowers to the family in memory of Travis Earl Cooper, Sr., please visit our flower store.