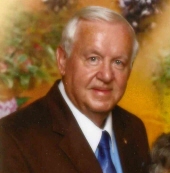 Ivan Wayne Nicholas, 78, passed away July 7,2019 at his residence in Sunflower County, Mississippi. Visitation will be held from 6:00 p.m. to 8:00 p.m. on Wednesday, July 10, 2019 at Ray Funeral Home. A Celebration of Life service will be held at 2:00 p.m. Thursday, July 11, 2019 at Ray Funeral Home in Cleveland, MS. Interment will be at New Cleveland Cemetery.
Wayne was born on November 1, 1940 to Allan Gordon Nicholas and Iva Jones Nicholas in the state of Oklahoma. He graduated from the University of Missouri with a bachelor's degree. On August 30, 1986, he married Betty Viola West in Cleveland, MS. Wayne had many passions such as photography, writing letters of encouragement, stamp collecting, as well as bird watching and gardening. Ivan also enjoyed studying God's Word when he was not writing for the Bolivar Commercial. During his 19-year tenure at The Bolivar Commercial, Wayne Nicholas won approximately 100 awards for excellence in journalism. Among the honors he received an award for a collection of editorials on freedom of the press. The citation said," Wayne was the first writer from a small newspaper ever to win the award." He started a mission for the street people in Gastonia, North Carolina, and was a frequent speaker at religious gatherings. While serving in Vietnam, Wayne was presented with the Bronze Star for work as a combat correspondent for the U.S Army. Mr. Wayne completed two years of Lay Ministry in the Luthern Church.
He is preceded in death by his parents, Allan and Iva Nicholas; his brother, Allan Nicholas; and his brother-in-law, Tom L. West (Mable) of Spokane, WA and Charles West of Brownsville, TN.
Wayne is survived by his wife, Betty Nicholas; his daughter, Kay Berryhill (Tom) of Tupelo, MS; his sisters-in-law, Lois West Tate of Tupelo, MS, Pat West of Brownsville, TN, and Mabel West of Spokane, WA; his grandsons, Tommy Berryhill of Saltillo, MS, Mark Berryhill (Kelly) of Douglasville, GA.; his great-grandchildren, Mark Phillip Berryhill and Preston James of Douglasville, GA
In lieu of flowers, consider a donation to the charity of your choosing.

To order memorial trees or send flowers to the family in memory of Wayne Nicholas, please visit our flower store.
Send a Sympathy Card