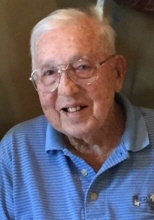 Dr. William Elbert Middleton, Sr., 97, of Cleveland, MS, passed away on December 19, 2018, at his home. Visitation will be 12:30 to 2:00 p.m. on Sunday, December 23, 2018, at Ray Funeral Home. A Celebration of Life Service will follow beginning at 2:00 p.m. on Sunday, December 23, 2018, at Ray Funeral Home with Brother Milton Burd and Dr. Hines Cronin officiating. Interment will be in North Cleveland Cemetery. The following obituary was prepared by William E. Middleton, Sr.
Dr.  William Elbert Middleton was born on July 15, 1921, to James Austin Middleton and Jannie Marter Middleton in Webster County, Mississippi. He was the middle son of a family of three boys. At the age of 5, he began school at Alva Consolidated High School located on the county line of Webster and Montgomery County. From an early age, he showed that he was both academically and atheletically talented. He graduated from Alva High School in 1940 as one of the top students in his class.
In the fall of 1940, he enrolled at Wood Junior College in Matheson, Mississippi. Here again, he proved to be superior in academics and athletics. William participated in both basketball and baseball, he stood out in basketball. He graduated in the spring of 1942 as one of the top students.
In the fall of 1942, he entered the U.S. Army. He was sent to Fort Riley, Kansas where he was placed in the 9th armored division. After basic training and maneuvers in the Mohone Desert in Louisiana, he was shipped to England. William participated in some of the bloodiest combat of the war in Europe. The Battle of Bulge, and the capture of the bridge across the Rhine River at Remagen. He also assisted in the release of the first allied prisoners in Limberg, Germany. Then drove across Germany to Liepzig and the Mulde River where the Russians were met, thus bringing the war in to Europe to an end.
He was discharged from the army in November in 1945. On December 22, 1945, he married Clara Henson, the love of his life, to whom he was happily married to for 64 years. William often said they were more in love the day she died than the day they married.
William completed his higher education at Delta State University, Columbia University in New York City, and Ole Miss from which he received his Doctorate in 1958. He taught in the public schools of Mississippi for 12 years as a basketball coach and as a superintendant of schools. Following the completion of his Doctors Degree, he moved into the college level first at Henderson State in Arkansas for 3 years and then at Delta State University for 24 years, from which he retired in 1986.
Dr. Middleton liked all kinds of sports and actually played golf well into his 90s. At Delta State University, he and Dr. Pete Walker were the founders of the Delta Area Senior Golf Associates, which is still ongoing with about 400 members. Dr. Middleton was, first of all a family man. His family came first, nothing was more important to him as his family.
He is preceded in death by his wife of 64 years, Clara Middleton; daughter, Sandra Clara Middleton; parents, James and Jannie Middleton; and brothers, James Aubrey Middleton and Houston Bunyon Middleton.
Dr. Middleton is survived by his son, Dr. William "Bill" Middleton (Nancy); grandchildren, Audra Michelle Cox and Carson William Middleton; step-granddaughter, Brandi Watts; great- granddaughters, Claire Renee Cox and Amy Kathryn Cox; and a host of relatives.
Pallbearers will be Junior Cobb, Dean Seely, Bill Boswell, Jim Holland, Julian Hardy, and Marvin Johnson. Honorary Pallbearers will be Donald Swafford and grandson, Carson William Middleton.
In Lieu of flowers, donations in honor of Bill Middleton may be made to Delta Area Senior Golf Association (P.O. Box 296 Cleveland, MS, 38732) or First Baptist Church.

To order memorial trees or send flowers to the family in memory of William Elbert Middleton, Sr., please visit our flower store.