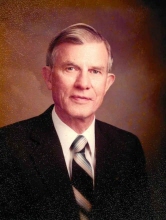 Judge William "Bill" Bizzell, 98, of Cleveland, passed away Saturday, March 12, 2016, at his home. The first visitation will be 3:00 to 5:00 p.m. Sunday, March 13, 2016, at Ray Funeral Home. A second visitation will be held 12:30 to 1:30 p.m. Monday, March 14, 2016, at First United Methodist Church in Cleveland. Celebration of Life services will immediately follow beginning at 1:30 p.m. Monday, March 14, 2016, at First United Methodist Church in Cleveland with Rev. Will Wilkerson officiating. Interment will be in New Cleveland Cemetery. Mr. Bizzell was born in Pace, MS on December 25, 1917, to Henry Clayton Bizzell and Pattie Tucker Bizzell. He was a graduate of Pace High School, and after graduation he obtained his undergraduate degree from Millsaps University. He then went to Duke University to complete a year internship before he proudly served our Country in the United States Navy. During his time in the Navy, he was a pilot, and he flew a plane through the English Channel looking for German submarines during WWII. Upon his return from the service, he attended Ole Miss Law School where he received his law degree. On May 28, 1946, he married Rita Brignac in Crystal Springs, MS. Shortly after marriage, they moved to Cleveland where he began his law practice with Mr. Albert Levingston. In his spare time, he still kept up his love for flying by taking several trips in his personal plane with his wife, Rita as well as taking other family members to places around the United States. He also took pride in his yard work. He was a member of First United Methodist Church in Cleveland and devoted much time to the church he loved. He taught Sunday School for 40 plus years there and was also very involved in the planning committee and several other areas in the church. Mr. Bizzell was the Chancery Judge for 26 years serving Bolivar, Coahoma, Tallahatchie, Leflore, Quitman, and Tunica County. He was very instrumental in the building of East Bolivar County Hospital, which in now known as Bolivar Medical Center. During its formation, he worked with the city and county as an attorney for the hospital; and throughout the years, he served as President of the Board for 25 years.
Mr. Bizzell stayed dedicated to his community by serving on numerous committees and he was always there to help others in their time of need due to his kind and giving heart. He was a longstanding member of the Rotary Club and was given the Paul Harris award for his time there. Due to his dedication, he achieved many titles in our community such as King of the Charity Ball, and receiver of the Book of Golden Deeds from the Exchange Club of Cleveland. He is preceded in death by his parents, Henry Clayton Bizzell and Pattie Tucker Bizzell; wife, Rita Brignac Bizzell; and his sisters, Leora Bizzell and Annette Bizzell. Mr. Bizzell is survived by his sister-in-law, Jeanne Brignac Burroughs of Tuscon, AZ; nieces, Rita Brignac Jones and Annette Brignac Veazey both of Forrest, MS and Joanne Burroughs Zabaldo of Tampa, FL; nephews, Dr. Richard Burroughs of Baton Rouge, LA and Robert Burroughs of Tuscon, AZ; cousins, Lee and Rose Bizzell of Pace, MS and their daughter, Rita Bizzell Hewell of Apex, NC, Harold Mitchell (Chris) of Cleveland, MS, and Word Bizzell, Frank Bizzell and Patsy Savage all of Texas; foster daughter, Joyce King Chamblee of Belle Glade, FL; and a group of sitters who loved and cared for him and were more like family. Pallbearers will be Joseph Crews, Jerry Ainsworth, John Henry, Dr. Steve Clark, Ben Bailey, and Charles Sbravati. In Memory of Mr. Bizzell, memorials can be made to First United Methodist Church P.O. Box 130 Cleveland, MS 38732, and/or Millsaps College 1701 North State Street Jackson, MS 39210.

To order memorial trees or send flowers to the family in memory of William Hardy 'Bill' Bizzell, please visit our flower store.
Send a Sympathy Card