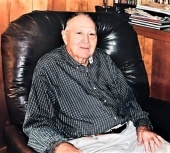 Willie Guido Malatesta Willie Guido Malatesta, 95, of Shelby, MS was called home to be with his Lord and Savior on March 5, 2020, at Olive Grove Assisted Living in Olive Branch, MS. A visitation honoring his life will be held on Monday, March 9, 2020 from 1:00 to 2:00 p.m. at St. Mary's Catholic Church in Shelby, MS. with a Funeral Mass to follow at 2:00 p.m. at St. Mary's Catholic Church. A Private Family Graveside will take place after Mass.
Willie was born on March 28, 1924 to Pete and Albina Malatesta in Shelby, MS where he grew up and graduated from Shelby High School. After finishing high school, Willie joined the United States Air Force during WWII. After being honorably discharged he worked as a self-employed farmer for over fifty years. Willie married the love of his life, Betty Jean, in December of 1954. In his spare time, he enjoyed spending time with family and friends playing Bocce. Willie is remembered for being a lifetime member of St. Mary's Catholic Church and being an avid outdoorsman, who loved his Lord, his family and his country. He is preceded in passing by his wife, Betty Jean Malatesta; his parents, Pete and Albina Malatesta; his son, Mark Malatesta; his sisters Dora Felicione, Rosa Bravata, and Regina Myers; and his brothers, Fred, Marino, Albert, Arthur, Victor, and Eugene Malatesta. He is survived by his daughter, Paula (Jerry) Edgerley of Hernando, MS; his sons Peter Malatesta of Shelby, MS, Tommy (Renee) Malatesta of Shelby, MS; and his grandchildren, William and Benjamin Malatesta, John and Jason Pope, and Kyle Edgerley.
Father Raju Macherla will officiate the service.

To order memorial trees or send flowers to the family in memory of Willie Guido Malatesta, please visit our flower store.
Send a Sympathy Card